THE ABSINTHE AT THE BEGINNING

The exact origin of the Absinthe is uncertain. In former Egypt, the medical use of absinthe extracts is mentioned in the Ebers Papyrus (between – 1500 and -1600). The first attested track of distilled absinthe containing green anise and fennel dates back to the end of the 18th century.
The legend has it that the Doctor Ordinaire Pierre is the one who invented the Absinthe recipe around 1792.

The absinthe goes with the French History since the end of the 18th century until nowadays.
This spirit crosses the “Belle époque” and goes alongside the accursed poets and the inspired painters. In 1905 the absinthe consumption of French people went up to 36 million liters! Stemming from the distillation of plants, the absinthe can be elaborated on different notes according to the recipe and the mastery of the distiller. 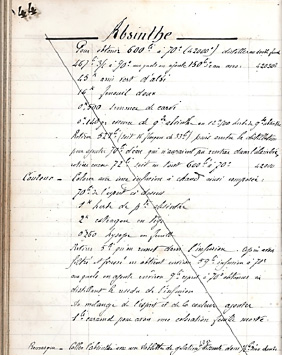 It is finally time to thank you :
The one who does not know all the poetry
That a crystal flask can carry in its womb,
That one has never been standing near a round table,

He will not support without his heart falling apart
There is no worth a thing on the earth
Of the absinthé artist the radiant sleep !

Cherry Rocher distillery wrote the most beautiful pages of its history by developing in its hundred-year-old copper stills this mythical aperitif. The plants selection, the maceration and distillation processes which take place in La Côte Saint André follow the ancestral recipe.

A knowledge rewarded by a “Cuillière GRAND OR” gave to our Green Absinthe 65% at the occasion of the 2014 Absinthiades.

Drinking absinthe is a rite:
– Fill the water fountain with ice.
– Serve a drop of absinthe in a glass.
– Put a sugar on an absinthe spoon then pour water on it, the sugar will dissolve…